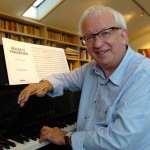 For over half a century the British composer Edward Gregson has been a leading voice in composition for the brass band. From his Concertante for Piano and Brass Band written as an undergraduate in 1966 to his latest commission The World Rejoicing due to be premiered later in 2020, Gregson remains at the forefront of brass band composition and for very many of us is the most significant brass band composer writing today.

It is therefore a matter of massive personal and professional pride that Morthanveld Publishing has been chosen as the printing and distribution partner of Gregson’s new brass band publishing imprint, the Edward Gregson Composer’s Edition. This brand will oversee the publication of any new (or previously unpublished) brass works, an area that his main publisher Novello have moved away from in recent years.

This partnership started with the long awaited publication of Gregson’s Concertante for Piano and Brass Band, composed during his studies in London and first performed in 1966. After a performance at the National Brass Band Championships in 1989, the composer withdrew the work for nearly three decades. After many requests from colleagues around the world keen to perform it (not least because of the novelty of having a piano soloists with a brass band) it was finally published and is available here.

Recently the latest CD of Gregson’s music for symphonic brass was released by Chandos, and it looks set to be one of the great landmarks of brass ensemble recordings; featuring London Brass, the inheritors of the mantle of the great Philip Jones Brass Ensemble, the playing is utterly superb. The disc features the new version of Music of the Angels, much of which will be familiar to brass band listeners as it originated in the Fodens band millennium commission The Trumpets of the Angels, as well as the new brass ensemble version  of the Symphony in Two Movements and a number of premiere recordings including works written for Philip Jones himself.

I’m delighted to be able to offer this remarkable recording for sale here, and am hoping to have the sheet music for many of these works available for sale soon, as they are currently in preparation. 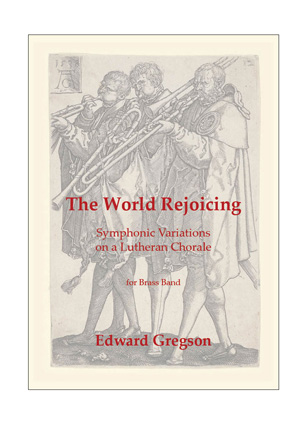 Lastly (for now) I am very much looking forward to the imminent publication of Gregson’s new work commissioned jointly the British Open Brass Band Championships and the national brass band championships of Belgium, The Netherlands, Norway and Switzerland. This work, entitled The World Rejoicing will be the set test for the next staging of each of these competitions and is due to receive its world premiere at the British Open in September. I was lucky enough to hear a sneak preview of this work towards the end of 2019 and fans of quality brass music are going to love it. Scores of this work will be available from 25 April and performing material will be available in June – both can be pre-ordered here.