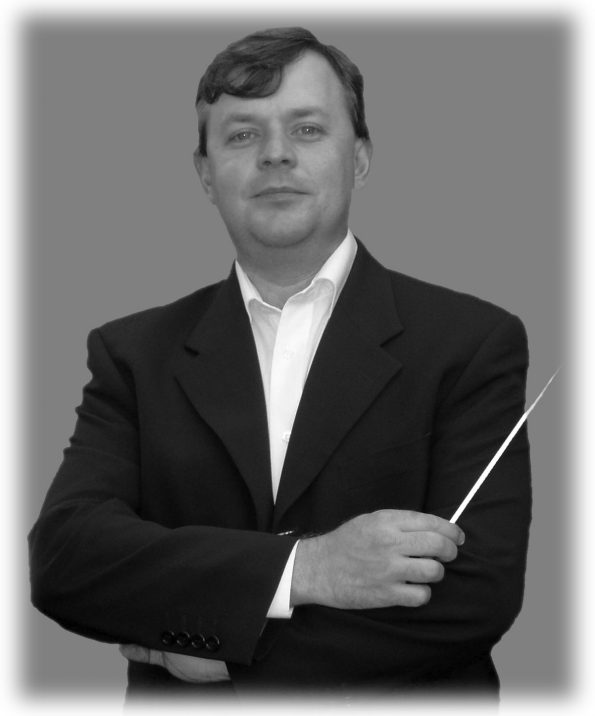 A musician for over thirty years, Andrew Baker started playing the cornet with Northop Band in North Wales at the age of eight. He was a member of the National Youth Brass Band of Wales and played in the premiere performance of Alun Hoddinott’s Symphony No. 8 for Brass and Percussion in 1992 under the baton of Edward Gregson. After studying at Nottingham University, where he took composition lessons with Nicholas Sackman and conducting lessons with Jonathan Tilbrook, Andrew worked for the Scottish Chamber Orchestra where he assisted with world premieres of music by James Macmillan, Sir Peter Maxwell Davies, Michael Nyman and many others. He also assisted with the award-winning recording of La Nozze di Figaro for Telarc conducted by Sir Charles Mackerras, including copying and typesetting previously unrecorded arias discovered during Mackerras’s research in Prague. Subsequently working for the Halle Orchestra, Andrew used the opportunity to watch and learn from some of the world’s most renowned conductors including Vernon Handley, Bramwell Tovey, Stanislaw Skrowacewski and Kent Nagano.

Since he returned to regular composition, Andrew’s compositions have been played all over the world, starting with The Well of St Winefrid premiered by the Opus Three Piano Trio in Chicago in 2003. In 2004 his composition The Cistercians won the Morecambe Band’s centenary composition competition. In 2007 one of his most successful works to date The Once and Future King was selected as the test-piece for the third section of the Swiss National Brass Band Championships, and the work was subsequently selected for the Regional Championships of Great Britain in 2009 and the Irish Championships in 2010. Andrew was commissioned to write Kopanitsa for the virtuoso percussionist Gavin Pritchard to perform at the Butlins Mineworkers Championships of 2008 (winning the Best Soloist award in the process), and he wrote Dragon Dances for the renowned tenor horn soloist Owen Farr to perform with the Cornwall Youth Brass Band in 2010. This work subsequently featured on Owen’s solo CD ‘A New Dawn’ released in 2014.

Andrew has also written choral music; his Hodie was written in 2009 for the Serenata Ladies’ Choir’s Christmas concert season. In 2015 he completed an MA by Research in composition at the University of Huddersfield with Aaron Cassidy, Richard Glover and Mary Bellamy. One of the works written during this period of study, atrium phase, won the Foden’s Band Composition Competition in 2014 and was performed at the Royal Northern College of Music Festival of Brass in 2015. Later the same year Middleton Band commissioned a new work entitled Perseverance using funds provided by the Arts Council and Hammonds Saltaire Band commissioned strange geometry to close their programme at the Brass in Concert Championship. In late 2016 Andrew joined fellow composers Lucy Pankhurst and Paul McGhee to write a collaborative work entitled Lucid Perspectives for the Woodbridge Excelsior Band, premiered at the Butlins Mineworkers Brass Band Championships in January 2017. More recently he has completed Ariel for the Hammonds Band, Ascend the Brightest Heaven for the Emley Band, Endurance, commissioned by Kapitol Promotions for the 2020 Regional Championships of Great Britain 3rd section and LeFay’s Mirage for tenor horn and piano commissioned by the Australian horn virtuoso Nicky Abkiewicz. 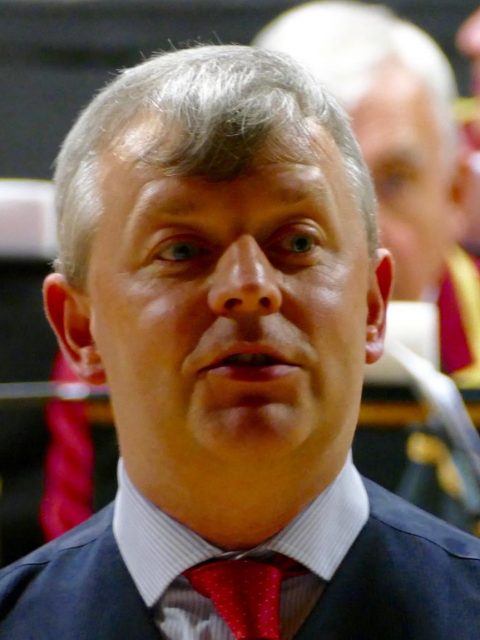 Andrew has been a ‘brass bander’ throughout his musical career, playing at some of the country’s finest concert halls with bands at every level and has also gained considerable experience as a conductor, having conducted brass bands at every level, brass ensembles, wind bands and symphony orchestras. He has been the Musical Director at the Blackley, Coppull & Standish and Middleton brass bands as well as LB Brass, and has also guest conducted rehearsals or performances with the Lindley, Northop, Wingates, Emley, Slaithwaite, Oughtibridge, RAF St Athan, Yorkshire Imperial brass bands, and the Barnsley and Huddersfield Concert Bands. He is currently the Musical Director of The Harrogate Band and the James Farrell Concert Band in Leeds.

He currently teaches the undergraduate module on ‘Scoring and Arranging for Brass Band and Symphonic Wind Orchestra’ at the University of Huddersfield.

Feel free to get in touch if you need a more detailed musical biography.