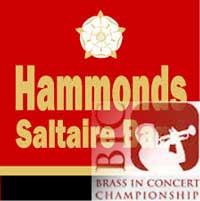 Morthanveld Publishing are delighted to announce the premiere of a new piece of music on Sunday 15 November – Morgan Griffiths and the Hammonds Saltaire Band have commissioned a new piece entitled strange geometry to perform as part of their exciting and innovative programme at this year’s Brass in Concert Championships, held at the iconic Sage concert hall alongside the Tyne in Gateshead. Unlike most band contests, the order of play is decided well in advance, and with Hammonds due to play late in the day both band and composer are hopeful that as full a house as possible will hear this new piece along with some of the band’s other recent innovative musical adventures.

strange geometry was inspired by two events in the summer of 2015 – the tragic death of the film composer James Horner and the amazing pictures of the planet Pluto sent back by NASA’s New Horizons mission. The music hints at the sci-fi cinema music grammar that Horner was such a master of in an energetic and exciting showpiece suitable for a Championship standard brass band.

You can read more details and order a copy of this exciting new concert work here!