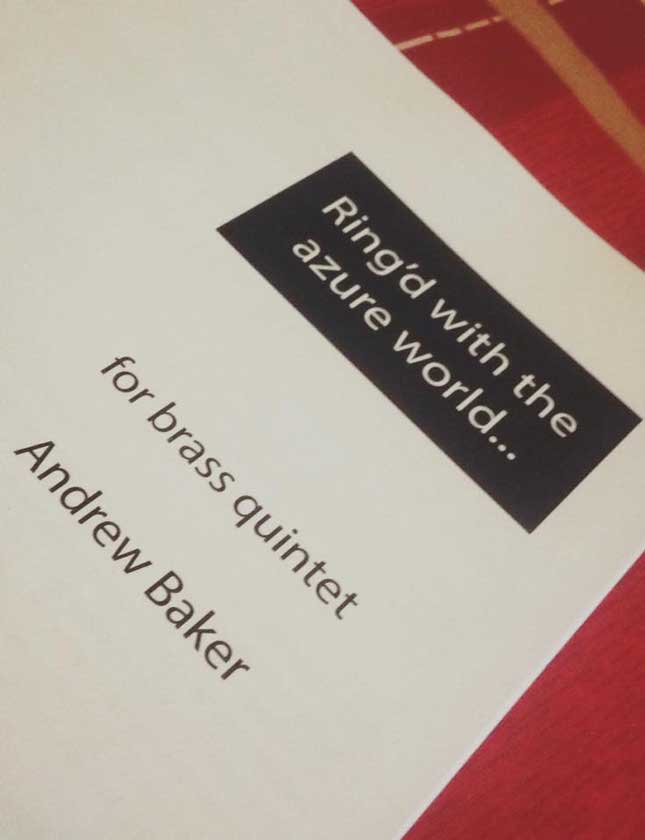 Friday 8 April saw a productive rehearsal on a new work for brass quintet. Ring’d with the Azure World… has been commissioned by the Harmonia Brass Quintet, five students at the University of Huddersfield, for performance at their final recital in May. The five instrumentalists in Harmonia Brass are all brass band players, and the piece is therefore written not for the usual line-up of two trumpets, french horn, trombone and tuba, but the more unconventional one of two cornets, E flat tenor horn, trombone and E flat tuba – although it will be available for sale in the more ‘traditional’ brass quintet version as well following the première performance in May.

The piece is roughly four minutes long, and derives its title from the poem ‘The Eagle’ by Alfred, Lord Tennyson:

He clasps the crag with crooked hands;
Close to the sun in lonely lands,
Ring’d with the azure world, he stands.
The wrinkled sea beneath him crawls;
He watches from his mountain walls,
And like a thunderbolt he falls.
The piece is a kind of controlled accelerando, starting slowly and increasing speed in a sequence of disguised tempo changes. It finishes with a flourishing gesture reminiscent of the “thunderbolt” fall referenced in the poem. Despite my woeful attempts at conducting my own music (they always say composers shouldn’t attempt to conduct their own music, Stravinsky was a notoriously poor conductor of his own music! Kenneth Woods has some things to say about his on his blog) the quintet are coping brilliantly with the complex time changes, and all involved are looking forward to the first performance.
Ring’d with the Azure World is available for sale in both the brass band instrumentation and conventional brass quintet versions; click here for more details.

2 thoughts on “Ring’d with the Azure World: New music at Huddersfield University”