Frriday 9 October was a good day for tenor horn fans in London as one of the world’s finest exponents of the instrument gave a recital at Regent Hall, a venue strongly associated with brass music down the years. As well as performing the piano accompaniment version of Dragon Dances Owen gave a couple of exciting new premieres – a new original piece by Christopher Williams entitled Elegy – in Memory of Mervyn Burtch, and Chris’s arrangement of the second movement of Gershwin’s Piano Concerto! In the latter Owen’s role was interestingly more that of an accompanist, with the piano taking the soloist role and the horn covering a number of the orchestral (particularly brass) parts.

Mervyn Burtch was a Welsh composer who sadly died earlier this year. He was hugely committed to writing music for amateurs and children – he has a number of works for brass band and choir to his name, and is one of the few composers to combine the piano and brass band in his Concerto for Piano and Band.

According to the review on 4barsrest, Owen’s performance was up to his usual astonishing standard. No surprise there, as he’s a truly exceptional brass musician. Someone once said of a famous euphonium player “if he played the ‘cello, he’d be world famous”, and much the same goes for Owen. See for yourself on his recent solo CD ‘A New Dawn’, which as well as Dragon Dances features fantastic works for the horn by Lucy Pankhurst 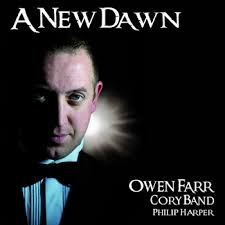